This article is dedicated to the memory of the late Robin Hugh Gibb, co-founder of the Bee Gees and a huge part of my childhood memories. Rest in peace, Robin. Heaven must surely be rocking to a disco party now. 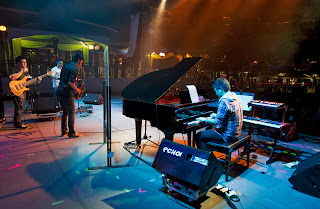 First up to storm the virgin stage were FVE Project (Funky Virus Experiment), a Kuala Lumpur based experimental band formed in mid 2011 comprising of five fresh, young musicians, all of whom were independently experienced well before the band was formed.

Guitarist Dean Sim performed with pianist Timothy Toh, bassist Feri Lau, drummer Omar Ibrahim, and smooth crooner Jeffny Kamar who plays saxophone. The crowd cheered the boys enthusiastically but it came as no surprise that home boy Dean got the most applause for his blistering solo, as the boy hails from their own turf, Miri.

FVE Project have performed at various venues and events around Kuala Lumpur as well as the Ambon Jazz Plus Festival in Indonesia.

More on them here: 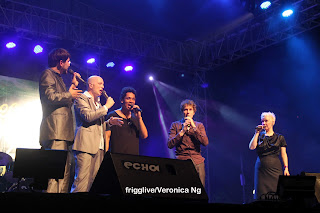 Next up was SLIXS, one of Germany’s best vocal ensembles. The six member vocal ensemble comprises of the phenomenal voice of Katrina Debus, the only woman in the band; Michael Eimann, the composer and founder of SLIXS, talented singer Gregorio Hernandez, Karsten Muller and Konrad Zeiner, two men with a rare vocal ability and of course; Thomas Piontek who blew everybody’s mind with his beat boxing skills who can create sounds capable of putting a whole orchestra to shame.

Every song that they performed drove the crowd crazy for more. They covered a number of hit songs such as TLC’s “Waterfalls”, Prince’s “Sometimes It Snows In April” and an improvised cover of “Jungle Boogey” that got everybody up and dancing.

Towards the end, each one of them showcased their fascinating ability to imitate the sounds of nature. It sounded so real that you would have to witness it to believe it. When their show ended, Emcee Gerard led everyone in shouting for an encore until the group members came running back into the spotlight to perform their closing number. 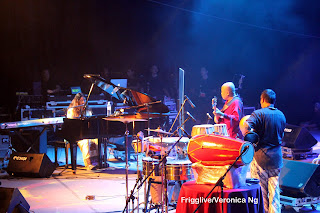 Fast rising Indonesian star Nita Aartsen is all about the connection between classical, jazz, a delightful touch of bossa and Latin music. Nita is a gifted pianist who also sings and she stands out as a music composer. Be it pop, rock, blues, classical, or any other genre, she breathes soul into it to make it alive.

On her website, Nita says “Music is like home to me.. It’s like a dining room where I have my harmony food, it’s like a bed to lie down and relax my mind from my restlessness, it’s like a living room where I join my fellow musicians, and even a spiritual room for my peace and inspiration. Music is also like a big garden for joy, fun and excitement.”

It was plain to see that music is everything for Nita, and that was what she gave at the Borneo Jazz Festival. Her show was thoroughly enjoyed by her audience.
My favorite had to be “Lullaby of Motherland”, where her forceful Piano playing weaved skillfully through the pounding bass and hypnotic vocals. 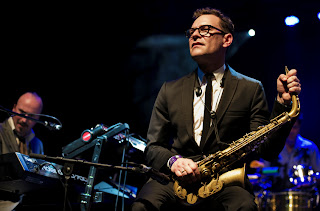 Question: What’s hipper than hip?
Answer : Why the New Cool Collective, of course!

Holland's sharply dressed 8 piece New Cool Collective are led by renowned Dutch saxophonist and composer Benjamin Herman. Formed in 1994 from a loose collective of some of Holland’s finest jazz players, their music is a fresh and visceral mix of highly danceable soul and jazz, spiced with Latin flavors. Their trademark power stems from their fiercely grooving rhythm section, complemented by Herman’s innovative arrangements which fuse big-band horn charts with live DJ-inspired beats.
As pioneers of Dutch jazz, the band was long regarded as the ugly duckling of the scene. Jazz purists found their ‘soul jazz latin flavours nineties vibe’ too hard and fast. But when a group of younger club goers found their way to Café Meander where they played regularly, the dam burst. Now everyone loves their concerts.

As a drummer myself, I was absolutely blown away by their drummer Joost kroon’s powerhouse style of drumming. The man is amazing, drumming non stop from start to finish with a unique minimalist style that is surgically precise and does not waste a single movement.
To collect more cool, click here: 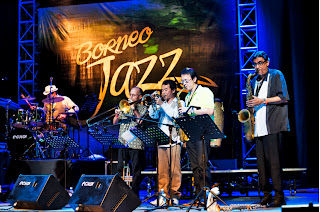 An 8 piece band led by pianist and composer Susan Harmer, Tropic Green’s musicians are from USA, Japan, Singapore and Cuba — a truly cosmopolitan mix in true Singapore style, which is where they are based.

Their material is original with captivating and unexpected twists — all written by Harmer. The fact that the band members have known each other for many years both as friends and as fellow professional musicians shows in their tight playing and camaraderie on stage.

In 2011, they were awarded a Singapore International Foundation grant to perform at Samui International Jazz Festival in Thailand. My favorite number had to be “Breakfast For Sparrows” 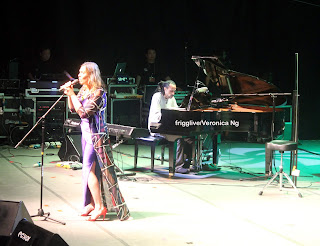 Bringing sexy back to Jazz, that’s what French-Italian Annick Tangora is all about. As a singer, songwriter and composer, Tangora is heavily immersed in the sounds of the Caribbean and afro-Latin jazz, and mixes a heady cocktail of influences.

Her songs, sung in Creole, English, Latin and French, are delivered in her sensually sultry voice. She is backed by a rhythm section of Eric Vincenot, Tony Rabeson and Jonathan Jurion.

Always warm, smiling and radiant, Tangora’s songs are odes to love and celebrations of life, delicate and sensual ballads, poignant messages in a mosaic of colors that carry the soul of intermingling. She juggles with notes as well as with words, evoking emotion, mellowness, and intensity that she shares with her brilliant fellow  musicians.

Hit this up if you're sexy 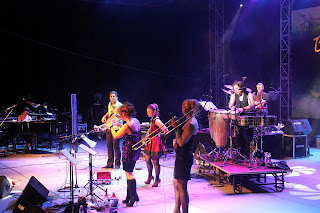 Schalk Joubert is a Cape Town born award winning producer, arranger and performer who plays bass and sings. His Three Continents Sextet totally changed the dynamics and energy of Borneo Jazz as they entertained with a sophisticated mix of western and South African jazz.

The uniqueness of this group is that they are from South Africa, Scandinavia and the USA - the 3 mega jazz zones in the world. SJ&T3C is made up of new generation jazz musicians, all schooled in the younger modern jazz scene where technical ability and inspiration are necessities.

Melissa van der Spy, long time Schalk associate plays the grand piano and is a composer in her own right.

I have seen Oslo based cili padi Shannon Mowday’s amazing alto sax and clarinet solos before, but she still blew me away again in Borneo, and stole everyone’s heart with her passion.

Hildegunn Oiseth is the Norwegian based avant-garde modern jazz trumpetist.

The super talented Rich Armstrong multi-tasked effortlessly on lead vocals, percussion, guitar and trumpet, even managing to change his shirt in between playing!

US based Kevin Gibson on skins completed the band, providing the much needed rhythm to keep the flow going. 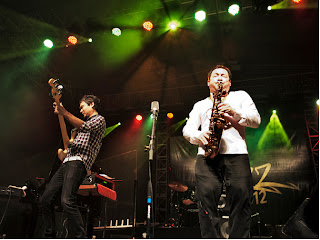 Mr Saxman @ Sekpol Unsamran, has been winning awards for the last two decades. He started his career when he was 16, and has since performed in over 10 different countries and recorded 5 solo albums.

Koh began his professional career in 1989, and later became a member of different  bands before he finally formed his own band called “The Funk Machine Band” playing fusion jazz, funky and pop jazz music and played in many clubs in Thailand.

He also performed in hundreds of records, films, television shows and commercial jingles. On-stage, he is an energetic and captivating musician.

Koh, his band and guest singer Betty added a mellow and surreal ambiance to Borneo Jazz, preparing it beautifully for the finale. 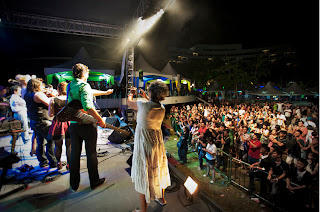 The festival’s finale was as enchanting as it was exhilarating. In a brilliant move, Mr Saxman pulled Shannon Mowday back on stage!

The two then proceeded to duet much to the excitement of the crowd. A warm synchronization between Koh and Mowday produced a tranquil and heart-warming ambiance that left the audience wanting more.

What a fitting end to The Borneo Jazz festival 2012 amid thunderous applause, gorgeous music and great company.
Posted by Dave Avran at 1:23 am

Cool piece. Fest was fun in the heat of the Miri night.
Well balanced program with world class high points.