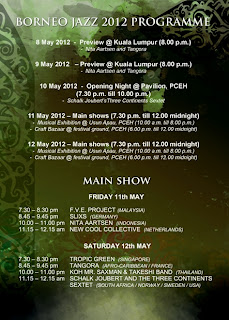 click to enlarge
Hey there. The exciting Borneo Jazz Fest (previously Miri Jazz) is less than 2 months away. Who best to tell you about it other than the Artistic Directer Ms Yeoh Jun Lin? Here it is in her own words: 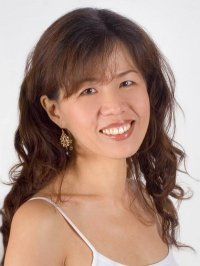 “Taking a moment to sit back and just view the programme from a wide angle lens, so to speak, now that it is all up and running.
Borneo Jazz is actually just round the corner. It’s a definite East-West flavor there this year. And a fairly balanced mix (I think!) of men and women musicians.
Most emotional setting at the festival is going to be F.V.E. Project who is based in Kuala Lumpur, but guitarist Dean Sim is a Miri-boy so it is a home-coming of sorts. They are young and cool and adoringly enthusiastic like only the young can be. This is said with a considerable amount of envy, of course!
I heard Nita Aartsen live at a festival in Bali last year and, while fairly quiet and low-key off-stage, she erupted into a dynamite performer at the piano on stage. Coming from a classical training background, her technique is impeccable. Watch her fingers fly!
Indonesian and Thai jazz performers are in a league of their own anyway.
And talking of Thailand, we’re getting in someone that I’ve admired for years now – Koh Mr Saxman and his Takeshi Band.  I was in Bangkok last week and was so excited to see huge billboards up in the city with his face on it. He’s a real star - running his own festival, running his own club, and on an Asian tour as we speak. How does he do it??!! Check out his videos. He has energy coming out of the screen. Can’t wait to get him live on stage.
One of the hardest bands to get together logistically was Schalk Joubert and the Three Continents Sextet. And from 3 continents they are coming from, indeed. Four beautiful ladies at the front - 3 on brass and I on piano, with very distracting good looks but their playing surpasses even that! And their leader, Schalk, is just as distracting - young, lean and blond and a real sweetie but completely tough and mean on the bass. He’s managed to persuade 2 other brilliant musicians to join them even if they have to fly from San Francisco and Cape Town, and I hear they have to fly right back again immediately after the gig as their schedules for the year are booked to the hilt.
The band with the most musicians this year is New Cool Collective from Amsterdam. I’ve been dying to get them to come and play for a long time. They have a huge reputation, but I hadn’t seen them live till 3 years ago and  I had a big smile on my face the entire time they were on stage. We can’t get the whole big band in unfortunately, but I don’t think they are going to be any less effective as the smaller band. They are reputed to be hipper than hip. Totally true. Musically, as well as visually. Take note of their snazzy outfits!
Tropic Green from Singapore is a recent discovery for me. Great arrangements. CD sounded terrific. Then I went to read the fine print on the CD - the composer (all original pieces) and arranger was Susan Harmer who’s also the pianist. I’m obviously top heavy on gutsy female pianists this festival. Don’t think anyone is going to complain much though! Anyway its a very rich palette of players she had in her band. They came from Singapore as well as from Cuba, Japan and the USA.
There was a moment of psychic link last October when the lovely Annick Tangora was emailing me at the same time I was emailing her to ask her if she was free for the Borneo Jazz dates. We both said YES! at the same time. Actually, she said yes before she even went to see if her powerhouse of a band was available. Unfortunately her pianist, the legendary Mario Canonge, couldn’t make it. He’s never going to forgive me for asking so late. His bookings usually run 2 years ahead. But Tangora said the equally formidable Jonathan Jurion could make it, so they are coming as a quartet together with Eric Vincenot and Tony Rabeson (she calls them her accomplices!). She’s a bubbly kitten off-stage, but transforms into a sensual siren with the most seductive voice on-stage. And the mix of Parisian chic with Caribbean down-and-dirty exuberance is intoxicating.
Then, something completely different to add that crunchy texture to the whole 2 nights show.  SLIXS from Germany - an a capella act that will have you falling off your chair. I’m a bit of a sucker for wonderful vocals, if you haven’t already noticed. Their manager and I had been in constant annual contact for years and years though we’ve never met and so it was very nice (understatement) to suddenly find that we had dates that could coincide at last.
So there are the 8 bands that are performing at Borneo Jazz.
Park Everly by the beach will be rather pleasant as a place to celebrate life.
Hope you are all well.
Best
Jun Lin
Watch this space for more insider snippets on Borneo Jazz. However if you just can"t wait, then surf to:
http://jazzborneo.com

Posted by Dave Avran at 7:52 pm No comments: