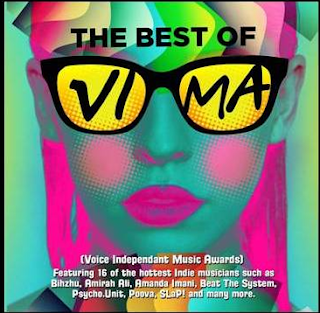 The best of VIMA compilation CD by Sony Music was officially launched yesterday. The CD is 4 years in the making, two years of work with Sony and features 15 of the best songs from VIMA 2013 and SONG OF THE YEAR from 2012 which was "Shine" by Beat The System feat Jaclyn Victor.

The CD is available at your regular music outlets including Speedy and Rock Corner. Retail price is RM31.90

There will be a series of interviews over RED FM, Traxx FM and 8TV Quickie right after the launch on 8th July, and they are also hoping to give away exclusive copies of the album via contests with the media which Sony and Bite Media will announce within a week. They are currently scouting for a venue sponsor to do a meet-and-greet the fans session with the featured artistes where fans will be able to buy autographed CDs and to meet the music celebs themselves.

For more info regarding the compilation please contact  bitemediaglobal@gmail.com.

Note: Bite Media is not taking a single cent from the sales of the CDs so that more money will ultimately go back to the musicians. Please share and help support the local music scene,and if there is one investment you can make this year, then please get this CD, so that they can generate more exciting compilations for you. They are also exploring iTunes for the digital format.
Posted by Dave Avran at 10:32 am No comments: 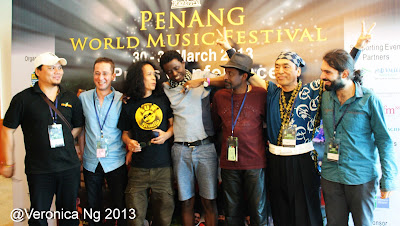 What do Malaysians do at a music festival in Penang? Why they gorge themselves on freshly barbequed satay and crispy succulent fried chicken and down it with cool coconut juice, of course. Who can blame them? This is after all Penang, home of delicious street fare.

Speaking of Penang, The Penang World Music Festival stormed back after a 3 year break bigger and better than ever before with a diverse genre of musical mélange of international and local musicians amidst the lush beauty of nature at Quarry Park, Penang Botanic Gardens.

The lineup featured musicians from 12 groups from all over the world including Turkey, Iran, Portugal, Philippines, West Africa and of course homegrown Malaysian talent. 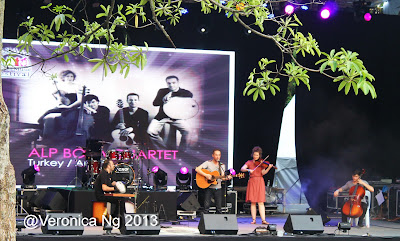 On the first day of the festival on March 30th, Turkish band the Alp Bora Quartet played the music of Anatolia. Their music was indeed serene, a great warm up for what was in store for us. 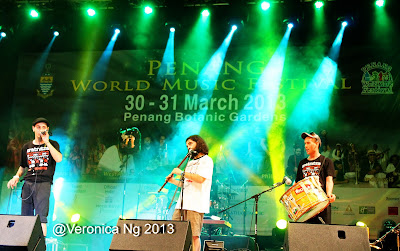 The 2nd group Oratnitza featured a mixed genre of Bulgarian, dubstep, drum ‘n’ bass and Aboriginal music. The heart of their music is the hypnotic drone of not one but two didgeridoo (played by the same guy, mind you) interwoven with the orthodox chanting of classical Bulgarian Mother and Daughter female singers. Oratnitza is currently rocking the Bulgarian youth.

Next act up was world-jazz fusion group Rimba, an 8 piece band from Sabah that cranked up the crowd with a mix of modern instruments intertwined with traditional ones. Their traditional Sumazau dance finally broke the ice and got us flapping like giant birds too.

Picking up the cue and upping the ante, Philippine ethnic rock band Kalayo was fronted by an energetic woman who owned the stage with her frenetic style and proved to be the highlight of day 1. Kalayo was definitely a hit with the crowd. 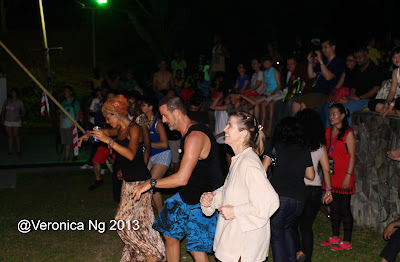 Dagaya from Japan proved to be the most stunning audiovisual experience of the night as their members were dressed in traditional gear while thumping beats on their Taiko Drums.

Their exact precision, expert timing and experience enabled each band member to perform a lengthy drum solo, accompanied by the soulful melody of the Japanese Shakuhachi (flute). The frenzied finale consisted of an outstanding synchronized drumming interwoven with skillful plucking of the Shamisen (stringed Japanese instrument).

Mu from Portugal featured the element of dance prominently in their performance, with vocalist and dancer Helena Madeira fronting. We travelled to several different cultures across traditional/fusion sounds as the band members played various truly unusual instruments from all over the world including India, Switzerland, Egypt, Brazil, Morocco and Australia.

For the grand finale of day one we were lucky enough to see MU’s skillful players on both the Bulbul Tarang, (stringed North Indian instrument) and the seldom-heard folk instrument Hurdy Gurdy, a medieval stringed instrument played by turning a rosined wheel with a crank and depressing keys connected to tangents on the strings.

A fitting end indeed, and an excellent appetizer to whet our anticipation for the next day. My only grouse was the inexplicable absence of a music journalist’s staple food during festivals - beer. Yup, no beer on sale. 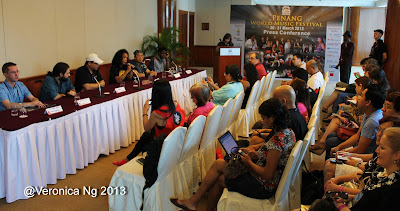 Things were looking up on day two as the packed audience appeared to be ready to party as soon as Nasout from Iran took to the stage. Could this have any connection with the fact that the organizers thankfully rectified the absence of beer? Your guess is as good as mine.

Nasout is led by a big, quiet bespectacled hat wearing gentleman with a chest-length grizzly beard. Talk about appearances being deceptive, He displayed incredible talent on the metal ringed Daf, one of the most ancient frame drums in Asia, creating both a drumming and tambourine effect.
As a Persian instrument in 20th century, it is considered a Sufi instrument to be played during the Zikr ceremony. With the haunting Tulum, an inflatable Turkish bagpipe, Nasout proved a great start. 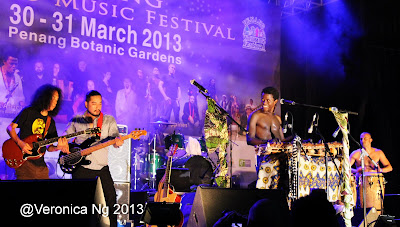 KimiDjabaté from Guinea-Bissau in West Africa came minus 3 members of his band due to an immigration problem. As is the nature of musicians, the show went on as musicians from Kalayo, Rimba and Mu graciously helped Kimi with his performance. Minus his shirt, Kimi played his Xylophone and thumped on drums churning out beautifully groovy music to sway to. 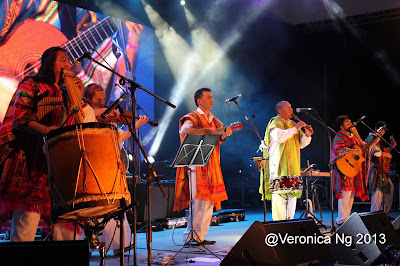 By now familiar to Malaysians, Andean Band Inka Marka were togged out in their trademark colorful robes and straw hats, their music imbued with the spirit of their forefathers and tinged with the sweeping chimes of the pan flute.

Malaysia’s very own multiple award winning 8 piece band Akasha soon had the crowd eating out of their hands with their upbeat fusion of classical Indian, Malay, Chinese and just about everything else imaginable, all played at a seemingly psychotic pace led by Sitar Maestro Kumar Karthigesu.

Guitarist and composer Jamie Wilson cheekily quipped, “We’re the only band listed in the Guinness book of records where each band member is sitting. We have no visual appeal”. 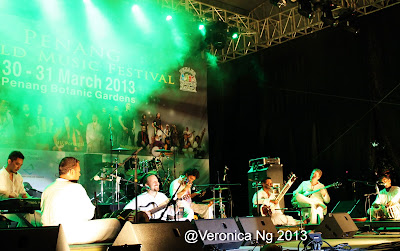 Sitting they may be, but that didn’t stop these superbly talented boys from scatting, careening and slaloming from Jazz to Country to Irish to Malay to Indian and Latin, switching from orthodox to classical to blues and rock, moving seamlessly as one explosive soundbite powered by Greg Henderson’s thumping acoustic bass.

Imagine (yes, pun intended) the sitar transitioning into Michael Jackson’s ‘Beat It’ whipping the crowd into a frenzy, only to have Akasha flirt with us by switching to a table powered rendition of Deep Purple’s ‘Smoke on the Water’. Without a doubt, Akasha were the stars of the night, ending with chants of ‘we want more’  and a queue at their merchandise and CD stall. 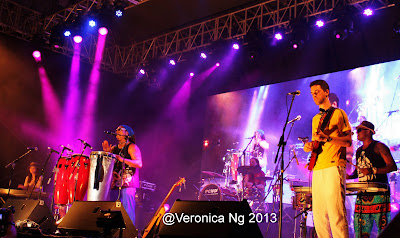 Predictably, the night then took a dip when Brazilian act Dendê and Band sadly lacked the musical chops to connect with the crowd, despite Dende making a valiant effort to mingle with the audience and urging them to sing and dance along with him. 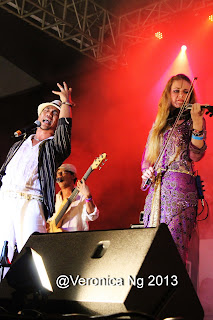 Indonesian 8 piece band Saharadja fared slightly better with their blend of ethnic Balinese and operatic rock. They also played a diverse range of instruments including the trumpet, electric violin, didgeridoo, sitar, djembe, sarod, darabuka, Irish tin whistle, congas, fretless bass, drums and a large assortment of percussion instruments, and Australian violinist Helga Sedli proved to be not only a great performer but also easy on the eyes, we still failed to regain our musical high.

The festival’s finale was a jam session of all 12 bands, with musicians and their traditional instruments, in their traditional clothes, jamming in a joyful celebration of life, of music and of new friendships formed.

Frigglive has attended countless music festivals over the years, and it must be said that the much awaited return of the Penang World Music Festival 2013 was a huge success. This should come as no surprise as it was managed by event management consultant UCSI Communications Sdn Bhd, a company helmed by Gracie Geikie where Artistic Director Amir Yussuf and her dedicated team are renowned for their meticulous attention to detail. 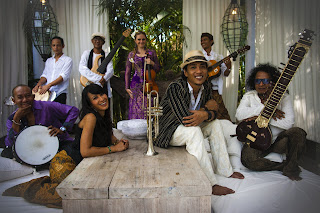 The 2013 Edition of the Penang World Music Festival (PWMF) has been confirmed to take place from March 30 to 31, 2013 and the list of bands performing at the festival is nothing less than impressive.

The venue will once again be the Quarry Park at the Penang Botanic Gardens. It is a tranquil and nature-inspired setting to showcase the diverse range of musicians that will be making Penang home in the last week of March this year.

A total of 12 bands will be featured at the festival during the two days. Among them are Mu from Portugal, Kimi Djabate (Guinea- Bissau), Nasout (Iran), Alp Bora Quartet (Turkey), Saharadja (Indonesia), Inka Marka (South America), Kalayo (Philippines) and Malaysian bands.

Each of the bands will showcase their unique music and instruments and together they will create a world tune that will rock the Pearl of the Orient. Mu will present the upbeat Portuguese folk tune using the bazouki and hurdy gurdy, cello and percussion while Kimi and his talented musicians will serenade the audience with the sound of Africa on the balafon.

Inka Marka will be making their second appearance at the festival, having performed once in 2007. This South American band will showcase the tunes of the Andes.

Kalayo which means fire is expected to put the heat on at the festival with their melodic traditional folk music infused with pop rock beat.

All the bands will be performing at the concert at night and in addition daily workshop sessions with the musicians will take place in the afternoon prior to the concert. This workshop allows the public and audience to participate and learn the unique music making processes of the international artists. The event will be held in the open air and will proceed through any weather conditions.

This encourages an atmosphere of openness and will enrich the visitors’ experience as opposed to conventional concert venues.  From the traditional to the avant garde, the rich spectrum that is World Music will be represented over two exciting days and nights of music and friendship.

This annual festival is organized by the Penang State Tourism Development and Culture Office and it is aim at attracting visitors to the island state. Tickets to the festival are priced at RM80 per day for adult and RM30 per day for a child between five and 12 years old. Tickets can be purchase online at www.ticketxpress.com.my

Penang the city-island state in northern Peninsular Malaysia has a long rich history of cultural significance and has thrived as being a melting pot for all of its history. From from being a 15th Century trading port with Ming Dynasty to a British colonial port in the 1700's, Penang has developed into a rich multi-cultural state within the Federation of Malaysia.

With the listing of Georgetown, the capital of Penang as one of UNESCO's World Heritage Sites in 2008, the significance of the island state on the world map was cemented. Given this reputation, it is only fitting that the music of the world is celebrated and presented in this melting pot of a city.

There are several direct flights flying into Penang.